The Contemporary Performance social network is sprouting into a very useful and possibly very influential plot of cyberground; with attentive cultivation from Network Curator Caden Manson (co-founder of the Big Art Group) it is blossoming into a cornucopia of new profiles and content from some of the most exciting artists working today, surpassing 400 members yesterday.

A little over a month old, the network is already a nutrient-rich soil for research, inspiration, dialogue, and perspective for artists working in this sphere (hybrid performance works and artists that travel between the fields of Experimental Theatre, Dance, Video Art, Visual Art, Music Composition and Performance Art) as a global demographic uploads their images, video, texts, and critical analysis, providing at least an Ubu Web-like overview of what is happening in this medium, but unlike Ubu Web, current, democratized, and de-hierarchized.

Jay Scheib, This Place is a Desert, Institute of Contemporary Art Boston (2007)

Perhaps the network (like so many other attempts at this sort of thing) will become cluttered by spam-weeds, and desperate actors (in this analogy, moles?), but this won’t happen as long as the big dogs stay involved like they seem to be right now; hopefully Manson has enough pull, himself posting videos of Big Art Group performances in Halle, Germany, for example, as well as this video, a mini-documentary with commentary by Under The Radar Festival‘s Mark Russell and The Kitchen‘s Matthew Lyons, to keep the artists and ensembles who are at the top of their creative games like Immediate Medium, Jay Scheib , Banana Bag & Bodice, sharing their content. Yes, most of this stuff is on the various video-sharing sites, but we all know the value in companion-planting when speaking of sustainability.

In any case, this site is rapidly becoming a jungle of delights that could, in fact, allow us all to share experiments in ways outside basic “I saw your show, you saw mine” creator/audience dichotomies, actually sharing the results of said experiments. As Thoreau said, “I don’t have time to make all of my own mistakes and successes, I have to learn from those of others…” (or something like that). 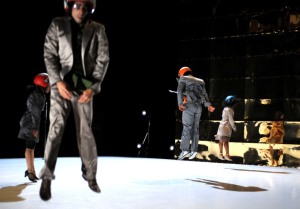